hi everyone,  Sheila here and ready to get into some new blockchain news.

(I must apologize, I wrote this about a week ago, and forgot to hit ‘publish’ -it is relevant though – so here goes)

Today we’re going to talk about an article that came out in Forbes –  it is about a very short history of Ethereum –  I highly recommend that you read it.

this article will be my take on that and a bit of a TLDR. (too long didn’t read) for the non geeks in the house.

even if you haven’t been using the blockchain you should know what Bitcoin is. Bitcoin is both a cryptocurrency  and a payment system. Just like Ethereum,  and Ripple,  and Canya –  all of these coins are built on the blockchain technology.

the one we are going to discuss today is called Ethereum,  just like Bitcoin it also uses the blockchain and because of its lower transaction fees and shorter transaction. Some experts predict that will overtake Bitcoin sometime this year.

What sets Ethereum apart from the rest?

Ethereum became famous because it Facilitates a technology also built on the blockchain – This technology is called a ‘smart contract’.  smart contracts or a condition-based contract that ensures that the buyer and seller  conditions are met  for fans change hands.

Ethereum offers two types of accounts –  those that are externally owned (they are controlled by private keys)  and contract right.

So why do so many people prefer Ethereum over Bitcoin? learn more here.

Well it turns out there are a few similarities between Ethereum and BitCoin, and there are some pretty huge differences as well.

There is a hard cap on the number of Bitcoins that can be mined currency Bitcoin has a 21 million Bitcoin cap the majority of those Bitcoins have already been mined but it is estimated that by 2021 only about 50% of The Ether coins would have been mine and there is an estimate of approximately 90 million tokens to be mined.

Something that we will touch on in a future post  is the difference between a ‘proof of stake’ system versus a ‘proof-of-work system’, Ethereum uses a ‘proof of stake’ system which essentially means ‘I can prove how many coins I have’ then there is the ‘proof of work’ system which is the one that Bitcoin uses. It is a system that determines the validity of the mathematics involved in verifying every transaction.

So why do so many people see if the Ethereum as more advantageous than Bitcoin?

Well Bitcoin was designed primarily as a ‘currency’ but a Ethereum can do much more using its ‘smart contract’ system –  this leads many large powerful companies like Microsoft to invest in it.

Not that Ethereum doesn’t face any problems –  in 2016 a hacker stole USD $50 million dollars worth of Ether and this resulted in a split in the Ethereum blockchain, namely Ethereum (ETH) and Ethereum classic (ETC).

Even with this fluctuation in the market Ethereum has seen dramatic growth in 2017 where it has grown by more than 12000% –  this is attractive to many investors, even though this volatility is scary that is still an amazing return-on-investment if you play your cards right. This platform is still so young there are a multitude of applications that could still be made on the ethereum blockchain infrastructure. Due to its popularity it has been enhanced dramatically over the last few years and although it has been challenged by many security problems it is still much less centralized than Bitcoin is, and is seeing a rapid evolution. 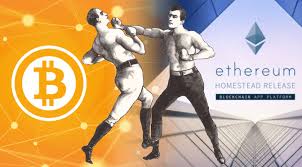 Over the past 2 years I have not seen one Ico built  all of the Bitcoin blockchain architecture every single Ico with investing in (in my opinion – which i don’t give because I am not an investment advice giver – dont take my advice)  has been both on the Ethereum blockchain –  the use of smart contracts means that many applications can be catered to by the ethereum blockchain.

I will give you two quick examples of how a smart contract changes everything –  1 a pizza delivery when you order your pizza $10 is placed into the smart contract and when the pizza delivery person drops the pizza off their GPS indicates that they have arrived at your location and the payment is processed,  if there are additional conditions for instance that you need to be the person that the pizza is delivered to then the delivery person can take a photo of you with the pizza.

2 – Smart contracts work much better if they are conditional –  this doesn’t always make sense sometimes conditions are gray –  in this case the contract can be written to include a balance of probabilities IE was it more or less likely that a condition was met?  included in the smart contract concept is a arbitration process –  this does bring a fee into the negotiation so it is basically to have no unconditional smart contracts be for higher tickets items and they generally are.

Check back soon as we will be reviewing other cryptocurrencies and there blockchain architecture in order to determine which one  will grow in 2018.